This service is in demand in energy, steel and other industrial sectors in which there is a need to move the large and heavy objects such as reactors, turbines, various containers, high-voltage transformers, machines and other equipment. We are engaged in a full range of services in the field of displacement large-tonnage objects. Staff  consist of highly qualified specialists: adjusters of various profiles, engineers and support staff.

Our success in the rigging services market with industrial equipment is obliged staff which is faithful to their cause and for many years realised projects of varying complexity with consistently high results.

We are ready  to perform the following services for you:

Our most advanced equipment to perform rigging works is capable of exercising any transport and assembly manipulation with your load. Using hydraulic gantry systems, we perform rigging transformers, machine tools, turbines and reactors as in handling operations as in pre-assembly machine tools and production lines with one detail weighing up to 1,100 tons of cargo with a positioning accuracy both vertically and horizontally 0.1 mm. 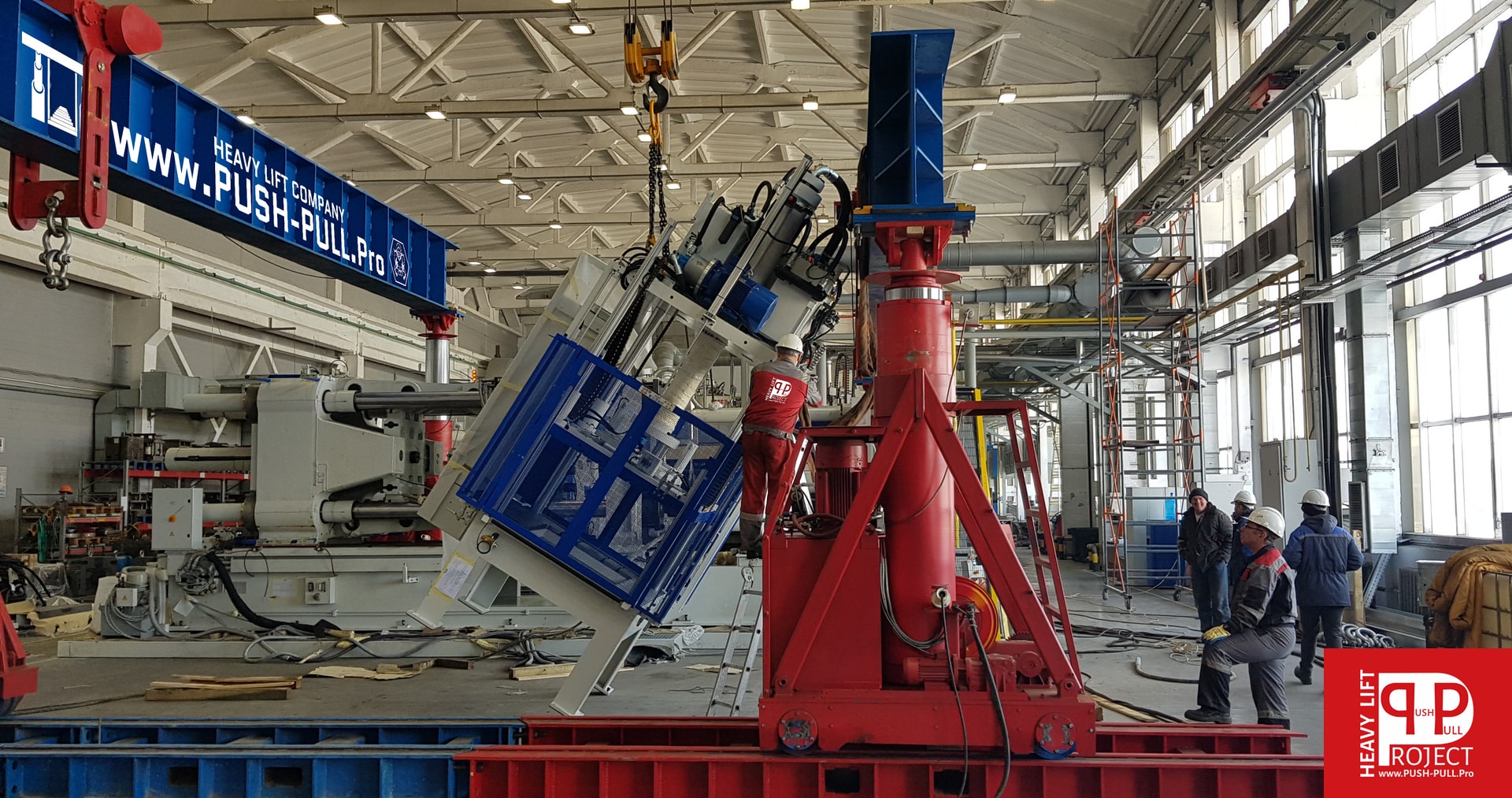 System of simultaneous movement of cargo by rail

System of simultaneous movement of cargo by rail using two hydraulic rods and a set stepwise lifting jacks used in rigging operations for the loading, unloading and handling of

This system is used with a mass of up to 500 tons of cargo.

When rigging delicate cargoes brook no vibrations and shaking , as well as when moving equipment on the fragile and unable to withstand its weight coverings we use on cargo moving system ” Air Cushion “.

When the compressed air supply to the air elements between the floor and the air Cushion is formed thinnest layer of air , which greatly reduces friction and load on the floor whereupon movement of cargoes takes place almost in the air. Cargo moving system on an air cushion is acceptable to use in rigging  transformers , machine tools and other industrial equipment weighing up to 360 tons.

Besides specialized systems for rigging of equipment, our company “Push-Pull” has a fleet of forklifts up to 10 tons and automobile cranes of varying capacities.

Our experience in rigging with industrial equipment, trained staff and the latest rigging equipment ensures the complete safety of your property in the course of various types of transport and installation procedures. Due to the coordinated work of the whole team and a thorough preparation for the organization of the project your time and financial costs are significantly reduced . Optimal pricing and reducing unjustified costs gives us an advantage over other companies on the market rigging services industrial equipment.

Besides services for lifting of industrial equipment, we offer services of the transportation of industrial machine tools, transformers, reactors, tanks in Russia and around the world.

Complex rigging services for industrial equipment weighing over 50 tons carried out on the territory of Russia and other countries of the world.

We have a wide network of branches in Russia and in the cities where we do not have our offices we provide mobile rigging service . Warehouses with equipment to carry out lifting operations with industrial equipment ( machine tools , transformers , etc.) are located in Moscow , St. Petersburg, Nizhny Novgorod, Kazan , Kirov, Saratov , Vladivostok. Since our services rigging of equipment over 50 tons are in any other cities and it is not possible finding the necessary rigging in the city in which you need to perform a rigging .

For order industrial rigging of transformer, industrial machine tools and other industrial equipment you can turn to our manager by phone or by filling out the order form rigging services pre-downloading it to your computer or contact us by question form.